[The following is a collection of notes from my day competing in the 2016 North American Grappling Association (NAGA) tournament in Salt Lake City, Utah. During the current time of pandemic-induced distance from everyone, I especially miss the camaraderie of contact that used to be part of my daily life.]

I’m writing this as I’m waiting for the commuter train that will take me to the event center in the suburbs where the tournament is happening.

I’m less nervous than I expected to be.

Thanks to Matt, Kat, Joe, John, Jake, and everyone else who helped to give me the confidence to try this.

I’m competing as a super-heavyweight in the 40-49 age division, both in gi and no-gi events (i.e., I’ll be wearing a judo jacket for one event but not for the other).

I’m just doing this to feel what (nearly) all-out grappling fighting feels like. In our school, we train hard sometimes, but you always know that even during a competitive sparring scenario you are just one friendly word or gesture away from breaking off and stopping and resetting. Not so in competition. Yeah, you are still able to stop the pain whenever you want–because this is still a friendly sport–but the stakes are much higher than during a class. When you signal for a stop, you lose; so you probably have a greater incentive to find a way out other than telling your opponent to stop. These strangers are going to show me where the holes in my training are in a different and very direct way.

The last time I was in an official martial arts tournament, it was a striking tournament in the 1990s, and I was disqualified for excessive face contact for my very first strike of the day. His guard was down, and he was coming in fast. It was difficult to not hit him hard in the face. I still shouldn’t have done it.

I’d like to clear that bad day from my record and be able to point to something more positive as my most recent sport combat competition.

You know that dream in which you have a test that you completely forgot to study for? Well, I’m experiencing a real-world grappling equivalent: As I approach the event center, thinking about tactics I’ll try today, I realize just how little I’ve worked on performing takedowns. (My focus has always been on self-defense, in which one prevents and counters takedowns.)

Let’s hope my reversals are strong.

This is one of the few contexts in which repeated spitting is not (much) frowned upon. The guy behind me in the line for weigh-in is a few ounces over his preferred weight division’s cutoff. I don’t think that spitting is going to do it. I recommended cutting off his man-bun.

Staff shirts here have the text ‘How may I choke you?’, with the ‘choke’ scratched out and ‘help’ scrawled below.

I like fitting in. I just don’t fit in in most contexts.

Here, however, no one looks at me funny for laying on the ground with my legs in a straddle split against the wall. In fact, this area of wall is now becoming crowded with folks doing the same or similar.

Also, my haircut and fashion sense are completely standard here.

Unexpected things to hear in a men’s restroom:

“Dad! I just dropped my kimono in the toilet!”

One great thing about open tournaments: relatively loose clothing requirements. I am currently dressed as Commander Spock for my first match. I wanted to dress as an original-series red-shirt, but I couldn’t find the right shirt.

The kid winning the expert kids no-gi competition is dressed as Captain America.

Oooh. There were no super-heavyweight men at my age, so I was bracketed with guys 12-15 years younger than me. The guy that crushed me (literally) was much bigger than me and at least as skilled. The guy that he lost to was exactly my weight but waaaaay more skilled than us.

I got one solid reversal and a capable armbar attempt in. I lost in about three minutes to the same armbar; he did it better.

So, now onto the gi portion of the day… the area in which I have even less skill and experience. After already having been smashed into the ground repeatedly.

Maybe I need to psych myself up like these people I see with their headphones in while warming up. Let’s see… I’ll just spin up some Ira Glass here…

BTW, the other guys in my division are very nice. There’s much smiling and high-fiving going around.

I just found out that the guy who crushed me studies under one of my favorite fighters: Jeremy Horn, nicknamed “Gumby” because he is superhumanly good at bending and slipping out of submission holds. I am honored that one of his students slipped out of my armbar.

The guy I competed against wasn’t Gumby-like. More Ben Grimm. 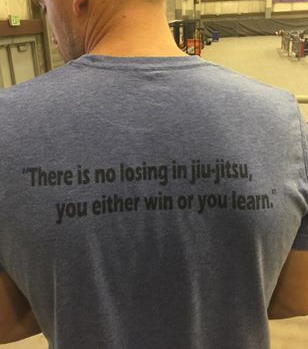 The big thing that I learned is that I need better conditioning. I got the first good position and the first good submission attempt of the match, but I tired out too fast and let my opponent dominate me after that.

Second place in my division in gi grappling. But my loss in this division was much worse than that in the no-gi contest.

I submitted in 1:05 from a keylock. I was susceptible to that because of a leg sweep that took me down with my super-heavyweight opponent’s shoulder expertly placed in my solar plexus upon landing.

I did some feeble struggling, but it was over when we hit the ground.

He (Mike) was very nice before, during, and after. Hugs aplenty.

There certainly are more people limping out of here tonight than limped in this morning.

I have a Mr.-Burns-level case of old man hip right now.

Now that the endorphins are wearing off, I think I need to congratulate Mike more strongly on that takedown. Egads. Class Monday is going to be fun.