So far, I’m still alive. I think that it’s safe to say that I will never again be doing this kind of work. I’m nowhere near as miserable as I was on the Diomedes, but that isn’t saying much. I’m paid more, I’m in pain less, and I have more authority to resist abuse. I just keep thinking of how happy I’ll be when this is all a memory. At least I won’t owe you any more money, and we can have an entirely different kind of conversation about my higher-education choices.

Today is the first day of daylight saving time here in Kamchatka, so the whole bureaucratic community is in an uproar. People who were supposed to make radio calls and reports at 15:00 were doing them at 16:00 and mucking all sorts of things up. Here is a brief overview of the problems that I have encountered lately: a $5 million (around a billion rubles) disagreement between the Russian fish cops and TINRO (ТИНРО); dealing with accusations that an old man is sexually harassing the crew on one of my boats; a new American technician on another boat whom I had to train; daily shouting matches with Kamchatski-Rybvod representatives; continued confusion regarding the allocation of 500 metric tons of blue king crab quota; fish-cops complaining to me about their pay; seasick scientists; Americans wanting to go home (which is damned difficult to arrange); arranging Japanese freighters and getting them permission to enter the Russian Exclusive Economic Zone; monitoring the quality of finished product for multiple vessels; and keeping the buyers in America, Korea, and Japan informed of what’s going on. That is a short summary of this week’s work. Don’t let anyone ever say that I don’t know what it means to earn a living. At least this week, no one pointed a gun at my head or left me overboard to drown.

This new guy has done some contract translation work back in the States, and he says that you can earn $20-$100 per page. I can translate two or three pages per hour now. I am seriously going to look into this sort of work as something that I can do to work my way through school. I’m not good enough for that sort of work yet, but I could be, given a year of study. Just something to think about.

At present, the best guess at my date of arrival back home is 10December. The quota mess is so confused that I could be back on 1November or 1January, but my best estimate is still in the first two weeks of December. I plan on spending no more than five days in Seattle, probably more like three, so don’t worry about me getting back early and staying out west. I have a few good reasons for staying on the west coast for a while, but I have more and better reasons for returning ASAP.

You should be getting this letter in the latter half of October. This letter is getting to you via an American who is riding a Japanese freighter back to Japan and will then fly to Seattle, where she will mail this. (I hope.) The last letter went to Korea first and should have been mailed from the US by an inspector returning home at the end of his two-month contract.

I really need to get off this boat so that I can eat some food that is good for me and exercise outdoors and in a fashion that is much more pleasant: running, cycling, fighting, et cetera. Here, it is nothing but calisthenics, some weights, stretching, and a lot of hyong. I have had to eat a lot of meat and go without milk, fresh fruit, and fresh vegetables. I want a salad, some strawberries, a banana, and some milk right now. (Of course, I want a lot of other things, too, but that is another subject entirely…)

When I first came up here, the sun was up for more than 20 hours per day. By the time we leave, it will be light for less than 6 hours per day. Welcome to the near-Arctic. The Arctic Circle is a few hundred miles north of here. I am more than a thousand miles north of you right now, and many thousands of miles west. The last time I was in the wheelhouse, our position was 58°19′N 154°15′E. That’s in the general area of Magadan, a Russian city on the northern edge of the Sea of Okhotsk. If an American boat had been this close to a Russian submarine base a year ago, we’d have been sunk immediately. Of course, I’m still a little nervous about the destroyer only a few miles away right now.

Spread the word of my continued survival to Tanya and anyone else you can think of. That’s all for now. I will see you within three months. 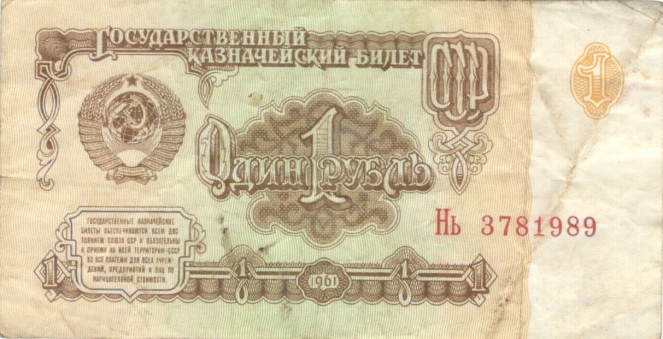 P.S.: That’s a one-ruble note. At current rates, it’s about 8 cents. [I was wrong about this. A ruble was worth about half a cent then.]