Yesterday marked the end of my second week on the Caminho da Fé, a trek for which I gave an overview in an earlier post. In just over half of the time allotted, I’ve gone just over half of the distance along the trail. As I write this from Ouro Fino, Minas Gerais,  I have 246 more kilometers to go in 12 days. No problem!

Last night, I stayed at a coffee farm in Barra:

I don’t like talking with people, as I have previously described. But I don’t really have much choice when it’s near sundown and I’m in a tiny village far from any hotel. So, I ask around about where I can sleep, and the locals direct me to a coffee farm that is set up to feed, lodge, and provision travelers, especially people performing this pilgrimage along the Caminho da Fé. I overcome my dislike of talking with people enough to arrange for a room, have dinner with the family, and learn some new vocabulary, such as ‘pinguinha’ for a shot of sugar cane liquor. The next day, I eat breakfast and watch chickens pick through the drying coffee spread out in front of the house. 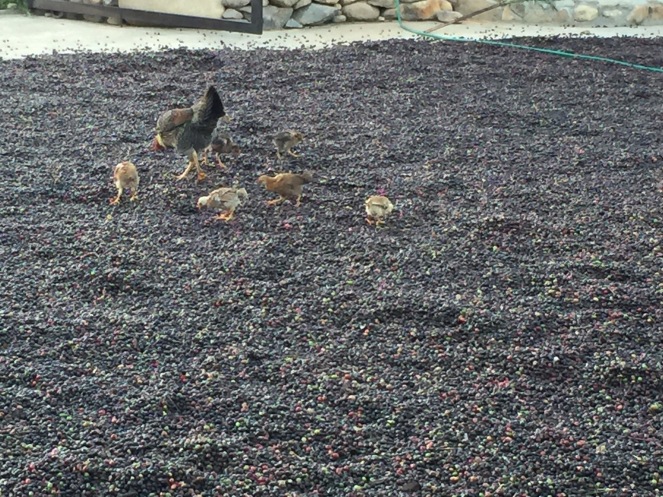 Before I left, I stuffed cold bottles of Gatorade into my pack and profusely thanked the proprietors, João and Joelma, for doing such a great job of providing for pilgrims on this trail.

It’s no accident that I need to interact with people more on this trip than I’m comfortable with. I chose this challenge and planned my schedule so that on most days I would be forced to talk with strangers in a foreign language if I didn’t want to starve or sleep outside. I look forward to the days when I’m in a city with a hotel where I can just say a few words up front and then be quiet and alone, but my route doesn’t only give me such days.

I started seeing other pilgrims about 100km back, between Casa Branca and Itobi, but only on bicycles. I’ve asked at a few places how many pilgrims come through, and the consensus is that there are essentially zero people this far out from Aparecida doing the pilgrimage on foot, but there are anywhere from a few people to a few dozen people per day coming through by bicycle. The last city at which one can officially begin the pilgrimage is Paraisópolis, 135km from Aparecida; I expect more pedestrians to start there.

No wonder people have been treating me even more strangely than expected.

When I got to São João da Boa Vista, I was entering an important phase of the trek: This is the city from which the Brazil 135+ ultramarathon begins each January. On Tuesday morning, I started from the UNIFAE gate in São João da Boa Vista in my own solitary time trial for this race course.

The 281km race course ends about 60km short of Aparecida. I’m expecting to take almost an order of magnitude more time to finish this course than the ~1.5days that the winners of the race take.

I didn’t meet any jaguars on that stretch of trail, but I did meet more mundane but still challenging threats hiking up a tropical mountain trail: heat, fatigue, thirst. And just when I needed it, there was a bench in the shade with a potable water fountain:

It’s easy to have faith that one will encounter the means with which to overcome challenges when those means keep appearing. I’m so grateful for the people who establish little points of support like this.

Much of the trail from Aguas da Prata to Ouro Fino (and beyond) is bordered by coffee and banana farms, so I have lots of time to—for example—notice that bananas have big purple flowers hanging from them…

… and when the natural wonders get dull, there’s the occasional artificial wonder to marvel at, like the giant golden “boy of the gate” at the entrance to Ouro Fino:

The name of the state that Ouro Fino (“Fine Gold”) is in is ‘Minas Gerais’ (“General Mines”). I’ll give you one guess why the Spanish and Portuguese colonizers fought over this place.

Well, tomorrow I’m off through Inconfidentes, a city whose name means “conspirators”, in reference to a failed revolution, the scapegoat for which, Tiradentes, is memorialized in street names throughout the country. This country’s history is not boring. 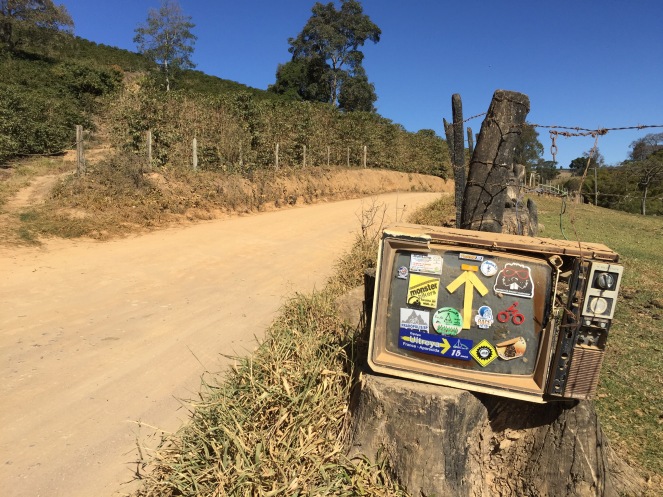