Yesterday, I arrived in Aparecida, at the national basilica honoring A Nossa Senhora Aparecida.

When I arrived, I presented my credential document, which had been stamped at various inns, ice cream shops, and other support points along the way.

Upon examining this document, an official gave me a certificate attesting to my completion of the pilgrimage. 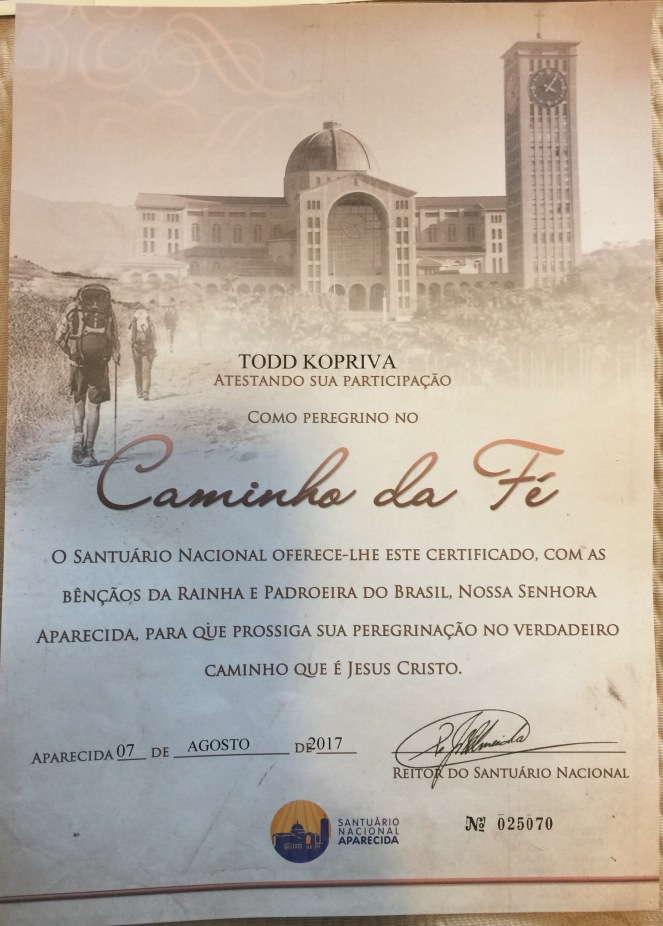 You can see that I’m number 25,070. It seems like both a large number and a small number: A lot of people have done this, but not as many as I would have guessed.

My last day was special and easy because I was very far from alone for the last 20km or so. Somewhere in Pindamonhangaba (a fun name to say) I came across two dozen members of the São Paulo SWAT team who were doing the pilgrimage on foot. They had a support vehicle carrying water, food, and most people’s gear—though a few stubborn, hardcore people were carrying their own packs.

I talked with several of these folks about why they were doing the pilgrimage, and most said that it was to give thanks for health and good fortune. Marcos, the support vehicle driver, said that his reason was to go to ask A Nossa Senhora Aparecida for fewer people to die violently in São Paulo this year.

Here’s Marcos showing off his SWAT tattoo just after we arrived in Aparecida: 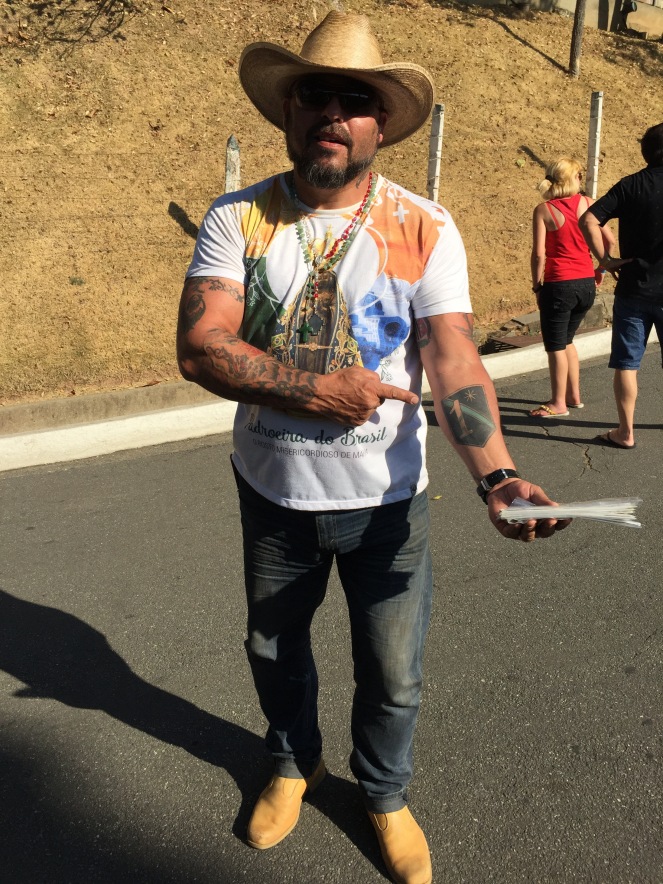 Not that I was very concerned before, but it did make me feel safe to arrive in this city surrounded by SWAT.

The previous couple of days had been rather lousy… and only mostly figuratively. I had slept in a stable my last night on the trail because the only pousada within 18km was closed. But, on the bright side, I had a stable to sleep in and a delicious tilapia dinner because a very kind man (Neto) welcomed in the strange North American. And the previous day had sucked because about 10km of the trail requires walking on slippery railroad ties descending a steep mountain. I’ll be feeling that day in my ankles for the next week. 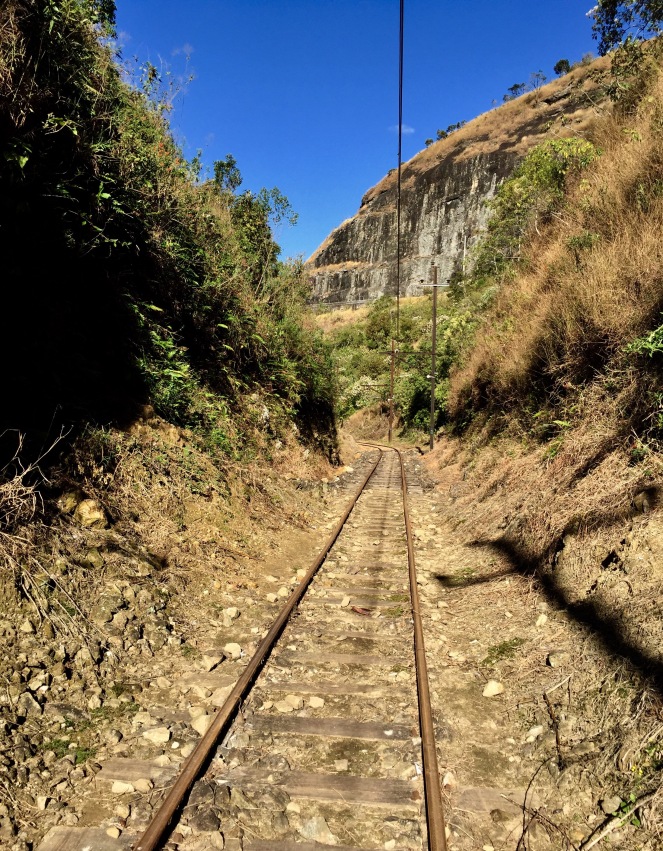 But, really, it seems petty to complain about one cold, buggy night and one precarious and physically challenging day. I had spent the day before in Campos do Jordão, Brazil’s equivalent to Whistler, BC: posh restaurants, beautiful homes, all of the amenities that one could want. It was amusing to note that I hadn’t seen a single police officer for almost two weeks… and then eight within an hour, as soon as I entered this playground for relatively rich people.

You can see that some of the more modest vacation homes in Campos do Jordão have the ticky-tacky vibe going on:

I stayed in a sort of hostel for bicyclists and such, Bikeville, which was comfortable and cheap and weird. I think that I can sum the place up with this lock mechanism:

The high point, literally, on the trail is around Campista, at ~1,860m (~6,200ft). I thought that the muscular toll of the ascent would be the bad part. It wasn’t. It was the cold. Yeah, it’s the tropics, but a cloudy winter day at 1,800m is still chilly, and the night is downright cold. I slept in a very drafty log barracks in Campista under all of the blankets for all of the dozen or so beds. It’s a good thing I was the only guest that night.

I was surprised at how easy the ascent was, but I suppose I shouldn’t have been: I had been acclimating myself to this kind of activity for quite a while by this time. I had really been fretting back in Luminosa, though, seeing that mountain range approaching.

The end of the Brazil 135+ ultramarathon changes from year to year, but in 2015 and 2016—the years when I was involved—it ended around Campista. So, my sub-goal of doing the course was completed in about 13 days, almost an order of magnitude greater than the winning times for the real competitors.

OK, so it’s over. I said in my first post that I was treating this as a final exam in two parts for my year of language study and physical training after quitting my job. How did I do?

The bar for passing the physical portion was to get from Sertãozinho to Aparecida on foot along the Caminho da Fé by the end of August 9th. Done, with more than a day to spare. Plus, I made lots of little side trips, walked around each town/village/city I stayed in, and otherwise did a lot more than just the official route. For example, I never missed a chance to wander around an abandoned train station:

I could have trained more with a pack, since my torso turned out to be the weak component, but I managed. I am disappointed that I didn’t move faster, since I had wanted to do a quick trip to Americana and Santa Bárbara D’oeste at the end. I give myself a C+ for this part.

Here are my FitBit statistics for the month: 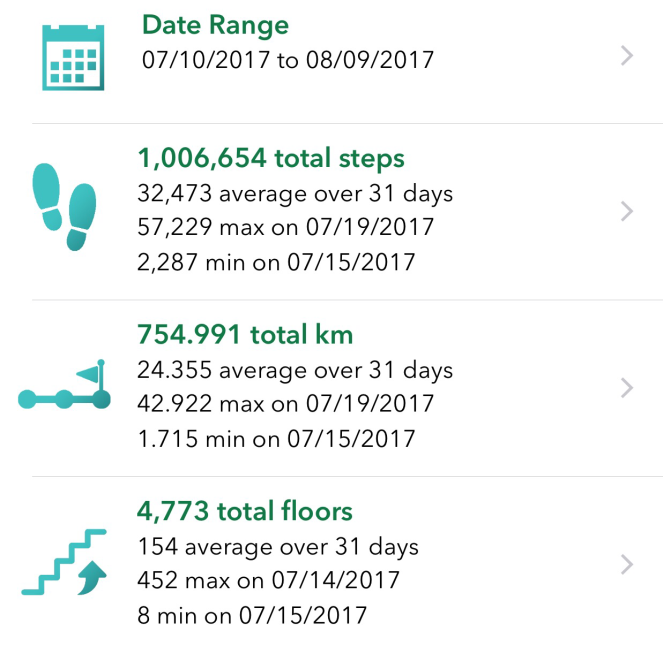 The bar for passing the language portion was to not use English for a month, not counting communicating with people back home (like I’m doing right now). I succeeded. Sometimes I needed to ask someone to speak more slowly or to repeat themselves, but I never failed to communicate about any practical matter. I even was able to discuss complex, sometimes subtle matters with people who were willing to be patient with me. I got quite good at explaining to the umpteenth incredulous Brazilian what was happening with Donald Trump. My ability to parse spoken Portuguese is way behind my ability to speak, read, and write, so some conversations could get tedious for the person needing to repeat herself. I was especially pleased at the many people who told me that they were convinced by my pronunciation that I was Brazilian. I give myself a B for this part.

This trip wasn’t just about testing myself, of course. It was also about reassuring myself that there are a lot of good people in the world. Spending a month on a rural trail where people go far out of their ways to help a strange foreigner is a good way to get that reassurance.

Tomorrow, I fly home. I miss my wife, my dogs, my bed, my kung fu school, my friends… I’m ready to go home. I’m so glad that I did this.

2 thoughts on “finishing up on the Caminho da Fé: I give myself a B-.”